30 Day Vs. 60 Day Campaigns: Which Is Better and Why? – Crowdfunding Blueprint – Launch your campaign with confidence 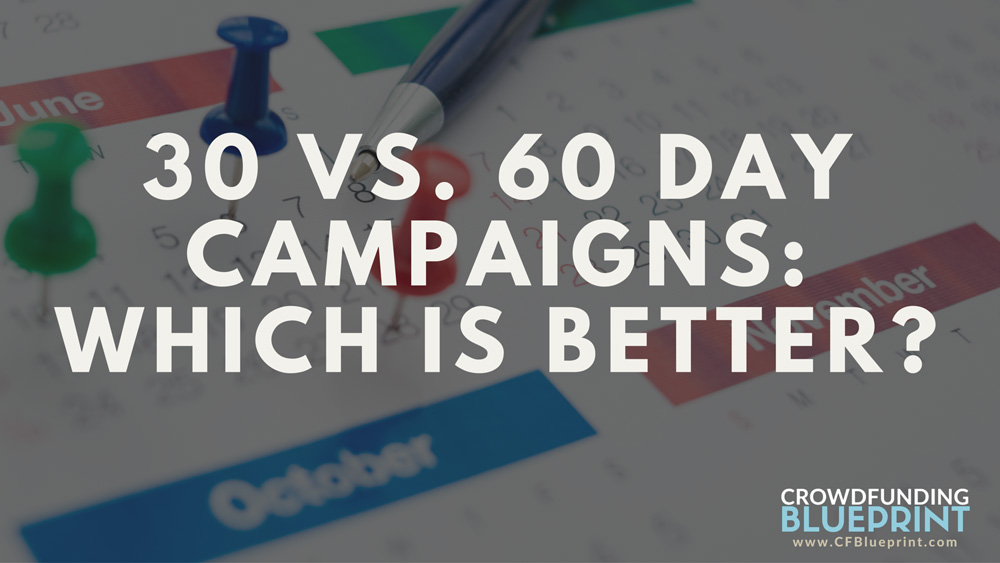 As you know, there are a number of options that you have here, depending on the platform that you have decided to use. In this article, I’m going to give you a quick look into my thoughts on the differences between the two, and then answer the big question as to which one is better.

A 30 day campaign is going to go by really quickly; this is just over 4 weeks of time to get all of the money that you’re working to get. But, there are actually lots of advantages when it comes to having such a short campaign.

Of course, there are some people that believe that it’s a lot better for you to just go ahead and do a 60 day campaign. Here are just a few of the advantages of doing a campaign for a little bit longer.

Which is Right For You?

Chris Dyson on Triple SEO says that “Kickstarter campaigns lasting for 30 days have a 35% chance of meeting their funding goals whereas campaigns lasting for 60 days only have a 29% chance of success,” so you can see that the difference is very slight. There are a few questions that you’re going to have to answer to figure out which one is better for you.

As you can see, the statistics above indicate that 30 day campaigns usually see better results, but that this isn’t always the case. My suggestion is that you go ahead and look at different campaigns that are similar to yours and compare the differences in their funding results. Then, you can see which set up (either 30 day or 60 day) is going to be right for your specific needs.

Related posts
What’s in a Headline? Why Your Title Can Make or Break Your Campaign
September 15, 2015
How to Create a High Impact Crowdfunding Video for Under $100
September 13, 2015
6 Things To Know Before Your First Crowdfunding Campaign
August 31, 2015
Kickstarter vs. Indiegogo – How To Pick the Right Platform for You
August 31, 2015
Recent Posts
Recent Comments
Categories