11 Questions You Have to Ask Yourself After a Failed Campaign 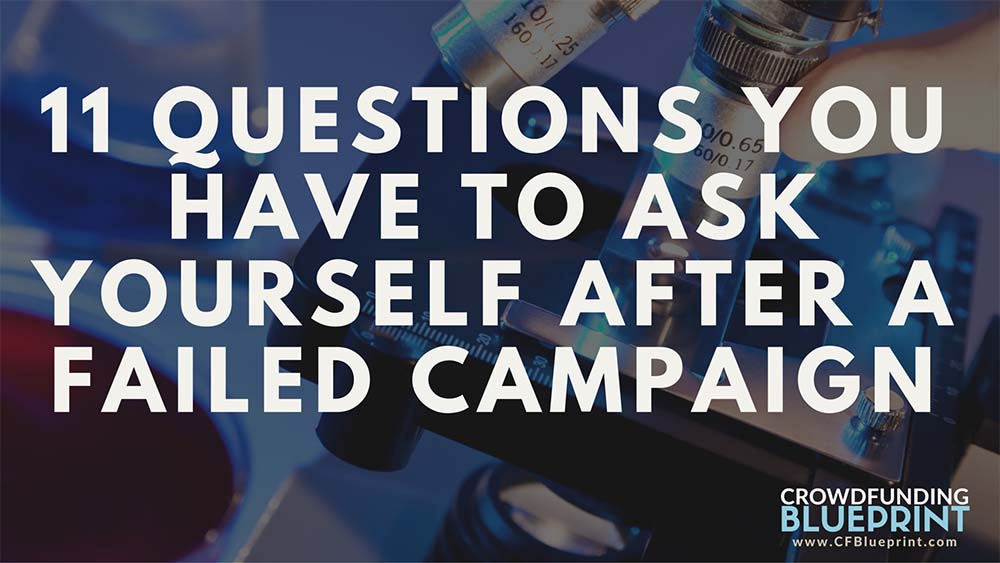 11 Questions You Have to Ask Yourself After a Failed Campaign

“Once a failure has been detected, it’s essential to go beyond the obvious and superficial reasons for it to understand the root causes. This requires the discipline—better yet, the enthusiasm—to use sophisticated analysis to ensure that the right lessons are learned and the right remedies are employed. The job of leaders is to see that their organizations don’t just move on after a failure but stop to dig in and discover the wisdom contained in it.” – Amy C. Edmondson, Harvard Business Review article from April 2011.

1. Did I make the project clear enough?

Clarity is an art, and you want to make sure that the people who are following your project actually understand what your project is all about. Paul Martinez from The Comic Starter put it this way:

“I know you want to tell us what your book is about… but you need to put at the top of your project in clear letters in less than two sentences what you are actually making. Is it a comic? How many pages? What dimensions? Color or B+W? These things should be there at the very top. Is it a tabletop game? How many players? How long does the game take to play? What ages? What does it come with?”

If you weren’t specific enough, that was likely part of the issue when it came to trying to get backers.

2. Did I start my outreach early enough?

In other articles on our site (link here), we’ve discussed how important it is to start your campaigning early. If you don’t get the word out early enough, you’re going to be in a position where you’re playing catch up with your marketing the whole entire time that your campaign is going.

3. Did I utilize all of the tools that I had available to me to the fullest potential?

There are so many tools out there for those who are running crowdfunding campaigns. Social media, blogs, websites, word of mouth, advertisements, and various other tools are available to you. Did you use everything that you could? Statistics indicate that popularity on social media has a huge role in the success of social media campaigns. Jeanne at AppsBlogger cites that:

“When Prof. (Ethan) Mollick looked into the data, he found that for every order of magnitude increase in Facebook friends: from 10 to 100 and from 100 to 1,000, the chance of a project succeeding increases hugely.”

Did you utilize your connections and tools to their fullest potential? If not, that may be something that you want to go back and explore for your next campaign.

4. Did I target the correct audience?

Your audience is a huge part of whether or not your campaign is actually going to be a success. When you target the wrong people, then you’re not going to find the people who would be instrumental to the success of your campaign. Here’s a story from Angelique O’Rourke of Bplans:

“Brandon Kelly of NYC Vanity ran a crowdfunding campaign for their product The Palit, a portable workspace for grooming and beauty routines in small bathrooms with no counters. They found that the crowd itself just wasn’t the right audience. Much to her surprise, after launch she found that “all of our contributors were people that we knew or friends of people that we knew.””

In that same article, O’Rourke goes on to explain that you need to figure out who your audience is and find the best way to reach them. Reevaluate your audience and make sure you know who you’re pointing your content at.

5. Did I make the project worthwhile for those who wanted to back it?

Did you offer enough for those who were looking to back your campaign? If your funding levels were too high, then you likely scared some people off. Ordinary people with average incomes want to make sure that they aren’t going to go broke if they’re going to back a campaign through a crowdfunding initiative. If you didn’t make the cost worthwhile to the majority of people, then that probably had a big role to play when it came to the failure of your campaign. Consider redesigning your campaign goals and making them more reasonable.

6. Do I need to reevaluate what I’m offering through my campaign?

Is your campaign actually something that people are going to want or need?

For example, Stonemaier Games has offered a number of what they call “Treasure Chests” full of pieces that are meant to upgrade any number of board games, not just the ones that they offer. They can be purchased on their website now, but each one of them started as a Kickstarter campaign. Even though some gamers remain unconvinced, there are still a number of them who say that the enhanced pieces enhance their entire gaming experience.
So, not only do you have to offer something that people need – you have to convince them that they need it! Did you do this with your campaign, or did you explain everything with the assumption that people were just naturally going to want to get in on it?

7. Do I have to reconsider funding levels?

Sometimes, the problem comes back to the fact that you may have been expecting too much out of the campaign. However, you don’t want to set the bar too low, either. According to Amadou Diallo in Forbes, “Of course, you need to set an amount high enough to cover the costs of actually manufacturing and delivering your product, but your goal should be one that you’re confident you can reach.” It’s a fine balance, and you want to make sure that you find that balance if you try to do another campaign for the project.

8. Did I use the right platform for my particular campaign?

Each type of crowdfunding platform is better at some types of fundraising than others. Allen Taylor at BusinessKnowHow puts it this way:

“Research the crowdfunding sites to determine which ones are a good fit based on the types of crowdfunding they specialize in and whether they target a specific niche. Also, find out if anyone else has been successful seeking funding for similar types of projects. Which crowdfunding source did they use?”

Did you do that? If not, it may be time for you to go back and explore those things for yourself.

Timing is everything when it comes to crowdfunding. Many people say that the holidays are not the best time when it comes to crowdfunding projects, but it’s a great time if you’re looking for personal crowdfunding. The periods following Essen and GenCon aren’t always the best time to try to get funding for board games and accessories. There are plenty of other timing issues as well.
According to Peter H. Diamandis and Steven Kotler, the authors of Bold: How to Go Big, Create Wealth and Impact the World:

“Timing is everything when it comes to crowdfunding. And there are two different timing sequences to pay attention to: market timing and launch timing. Market timing means that the world has to be ready for your solution… Launch timing means understanding that people follow schedules.”

Look at both of those types of timing. Where did your campaign fall in there? Is the market ready for what you have to offer? Or was it just “off” compared to the schedules that people keep?

This relates to the last two questions a lot, but the main thing here is that you have to determine whether or not you did the research necessary in order to succeed. Research is absolutely vital when it comes to doing anything and everything that you are setting out to do.

Unite for Sight, which is a global health initiative, puts it this way:

“The purpose of research is to inform action. Thus, your study should seek to contextualize its findings within the larger body of research. Research must always be high quality in order to produce knowledge that is applicable outside of the research setting with implications that go beyond the group that has participated in the research. Furthermore, the results of your study should have implications for policy and project implementation.”

Without research, it’s going to be difficult for you to really see what’s going on. So, if you decide that you want to redo the failed project, or you want to try another one in the future, you will want to put in the necessary research.

11. Should I try another crowdfunding campaign for this same project?

The ten previous questions all lead up to this one major question – should you try again? That’s incredibly important to ask, and the answer will depend on the answers for all of the other questions that we’ve listed here.

Even though it can be stressful to try and evaluate where you failed, it could ultimately make it so that your next campaign is a complete success. There are plenty of stories in the board gaming world (and other arenas of crowdfunding) where, on the first try, they didn’t reach their goals; but, on the second try, they blew their goals out of the water. If you learn from your mistakes, and correct them, you may find the same results.

As time goes on, it will be easier to pinpoint where certain crowdfunding campaigns get it right and where others get it wrong, but at this point, these 11 questions are a great stepping stone for you to utilize in order to figure out the direction that you should go in after a failed crowdfunding campaign.