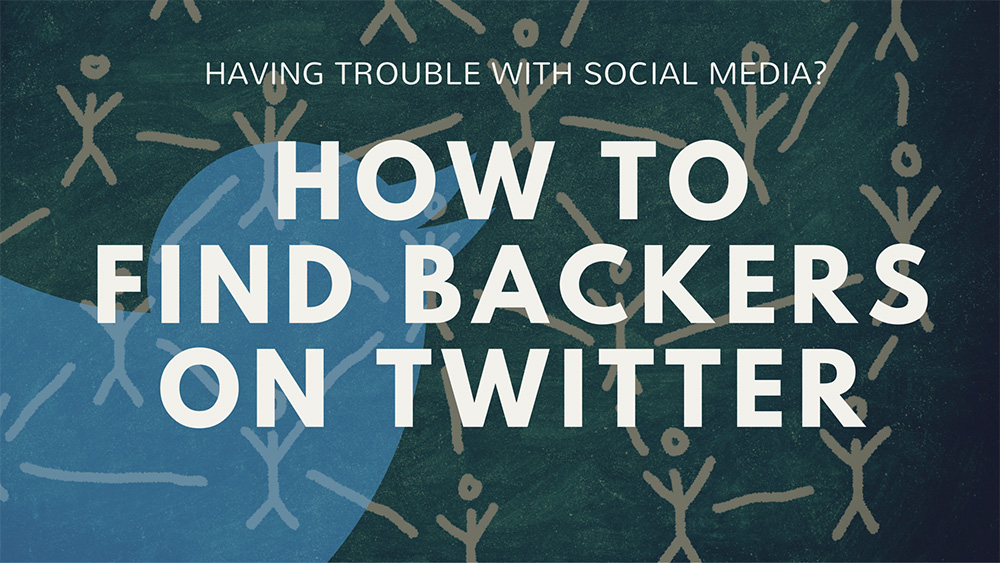 So, you’ve got your project set up and ready to go.
Now all you need are backers!

But where are these mystical beings? Where do they congregate?
And how can you take them from not knowing who you are, onto your page opening up their wallets and actively backing you?

As one of the most popular websites in the world, Twitter is definitely a great place for you to announce yourself to your target market.

As Aaron Lee explains “You will be able to connect with your customers because they themselves are using Twitter. Twitter has become a daily routine where people log onto it every single day, some log onto Twitter the first thing they wake up even before brushing their teeth.”

Ok….so it’s good to know they’re so addicted to the site they’re forsaking personal hygiene, but what do you need to do to get noticed?

After all, it’s a delicate balancing act, isn’t it? Come across as too pushy and you’re likely to put people off but be too passive and your audience won’t know your campaign even exists!

With that in mind, here’s a few strategies for you to use to help build relationships on Twitter.

This may sound obvious, but you want to make sure that you’re giving value on your account before you start asking for anything. If your first tweet links back to your campaign page, chances are, you’re doing it wrong!

Try to tweet on a regular basis because by doing so you’re going to increase your exposure and ensure that you hit the feed of more followers.

According to Kendall Almerico (Entrepreneur Magazine), “Twitter is a moving target. If your post does not hit a follower’s feed when that person is looking, the post is likely lost and gone forever as far as that person is concerned. Sending one tweet a day is not enough. Even tweeting about the campaign in the morning and again at the day’s end means 95 percent of your Twitter followers won’t see the tweets.”

So by Tweeting early and often, you’ve got the best chance of catching the attention of the most people that you can.

Look for People that Back Crowdfunding Campaigns Regularly

Ok ok, I admit it; I’m a serial crowdfunding backer.

What is a serial crowdfunding backer, you may ask?

In short, I like to keep up to date with the interesting crowdfunding projects, and when I see one I like, there’s a high likelihood I’m going to back it.

The way I see it, as an entrepreneur myself, it’s my duty to try to help other businesses succeed.
But I’d be lying if I claimed it’s an entirely philanthropic pastime – I back campaigns because I want to see the project come to life, and I want to get my hands on it too.

So why’s this relevant for you and your Twitter strategy?
How does that information help someone who’s looking to connect on Twitter?

As Mark Tapio Kines states, “I looked at the backer lists for Kickstarter projects similar to mine. Then I got on Twitter and searched for those people who had backed at least 20 campaigns – “serial backers,” I call them – and followed about 200 of them. Only about 40 of them followed me back. But when someone follows you back, it means you can Direct Message them. So I DM’ed those 40 serial backers, asked them to consider my project… and more than half of them wound up pledging. Some even became the film’s biggest cheerleaders.”

Clever strategy, wouldn’t you say? By finding serial crowdfunding backers on Twitter and getting in touch with them, you’re not only increasing your chances of getting backing, you’re also building an engaged following who are likely to share your campaign and help you to spread your word… win:win.

Engage with Twitter Accounts that Focus on Current Crowdfunding Projects

There are so many different Twitter accounts out there that it can sometimes seem like the wild wild west. But how can you identify those with whom it’s worthwhile to build relationships?

One great strategy is to use a tool like buzzsumo to identify influential accounts (known as influencers).  In particular, you’re going to want to identify accounts related to :

a) crowdfunding
b)  your subject matter

So, for example, if my campaign is for a new and improved coffee machine, not only would I want to connect with crowdfunding accounts,  I’d also want to find influencers that have an active following within the coffee world!

A quick search returns over 400 pages of results for such people (note that the free version of buzzsumo limits the results you can see).

By following and engaging in conversation with these accounts, and importantly following their followers too (after all, someone following a coffee account is likely to be a coffee fan!) you’ll find that you soon start to grow your reach quite dramatically.

Drew Hendricks from Small Business Trends explains it this way: “Twitter offers a fairly complex search function that allows you to browse the platform for those who can specifically relate to your cause. If you can find these people, you can add them to your list of followers and enlist their help in marketing your petition. Many won’t want to have anything to do with crowdfunding, but others will see your campaign as an eye-opener that can raise awareness for something they also believe in, and they’ll be happy to help”.

The Role Of Hashtags

When traversing the Twitter landscape, you’re going to want to use appropriate hashtags (#) in your statuses.

Hashtags serve as an easy way to group together statuses on a particular subject. What this means is, even if someone isn’t following your account, if they search for that hashtag, your message will still be seen.

How do you determine which hashtags to use?

The website hashtagify.me is a great place to start

Simply enter in your keyword (in my case, coffee) and the site will show you the top hashtags linked to that phrase: 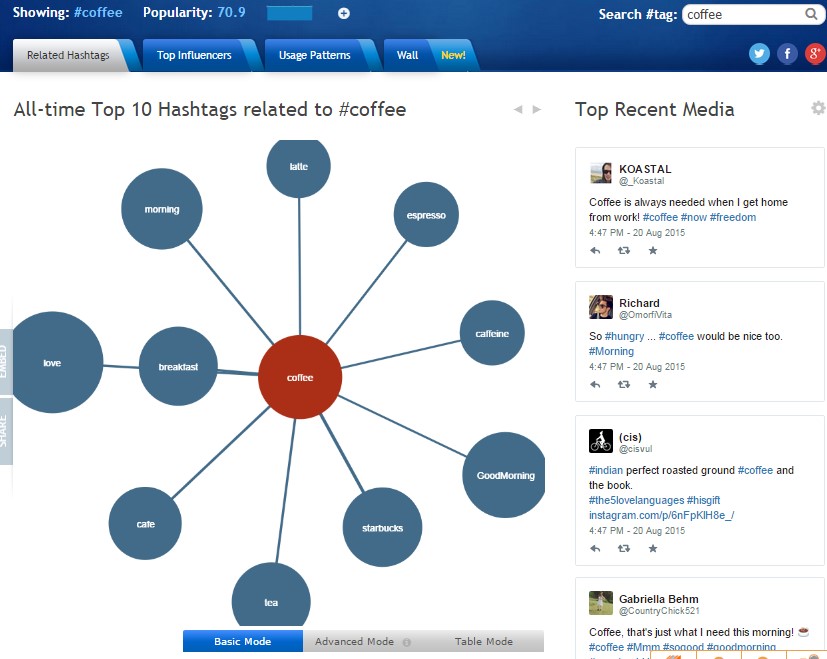 Knowing this information will allow me to tailor my posting strategy (ensuring I post content relevant to these communities) but will also allow me to see what others using the hashtag are talking about too.

As you can see in the image above, hashtagify.me shows me recent tweets using the coffee hashtag, but using the native twitter search can also bring up this information too.

Take a look at what’s being talked about and get involved in the conversation. Don’t be self promotional all the time – try to give real value in your message. In the coffee example, you’d want to tell people about your favourite coffee bean they might not have tried, or you’d want to talk about your favourite independent coffee shop, or perhaps you’d share your thoughts on your electric coffee grinder vs your manual one.

There are lots of ways that you can engage on Twitter but the key thing to remember is that, just like real life, a conversation requires you to both listen and speak – don’t make the cardinal error of bombarding people with messages but ignoring the conversation they’re actually having.