Kickstarter vs. Indiegogo – How To Pick the Right Platform for You – Crowdfunding Blueprint – Launch your campaign with confidence

Kickstarter vs. Indiegogo – How To Pick the Right Platform for You 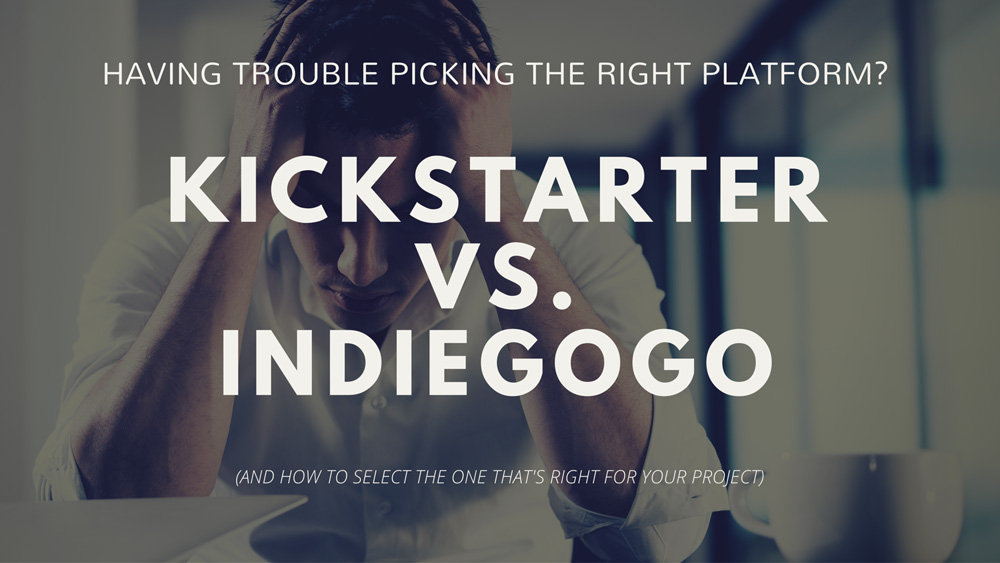 Kickstarter vs. Indiegogo – How To Pick the Right Platform for You

Crowdfunding has exploded in recent years, and as more people are getting their ideas out there, it continues to grow at jaw dropping rates.

If you’re looking to get in on the crowdfunding train, then the first thing you’re going to want to do is compare the different platforms to work out which is  better suited for your needs.

Some of the things to look for when making your comparison include
– success rates of past projects,
– the amount of money projects in your sector have raised,
– the overall traffic/popularity of the site with your target audience

So, where should you start?

Well, there are quite a few sites you can potentially use, as you can see in this infograhic by Wrike.com

For the purposes of this comparison we’re going to be looking at the two biggest platforms, Kickstarter and Indiegogo.

Now, whilst these two sites might look similar on the surface – they both get thousands of hits, they’ve both helped entrepreneurs to raise millions of dollars, and they’re both fairly easy to use (for both backers and campaigners) – there are some fundamental differences between them.

So, which one should you be using when you’re putting together a crowdfunding campaign?

Kicking Things off with Kickstarter

First thing’s first. For the sake of repetition, I’ll be using the terms Kickstarter and ‘KS’ interchangeably and Indiegogo and ‘IGG’ in a similar fashion too!

In terms of popularity and traffic, KS is by far the most popular of all of the crowdfunding sites.
According to Shopify, KS has monthly traffic of $23 million vs IGG of $13.4 million.

With a broad array of categories (16 in total) you’ll find everything on KS from tech and board games to music and fashion. All categories are highly active and are constantly breaking fundraising records.

Recently, for example, Exploding Kittens a card game based on kittens and explosions (as the name would suggest), broke records by raising almost $9 million and having over 200,000 different backers.

What does that mean for you? Well, if something as obscure as a card game about exploding kittens can get 200,000 backers, it’s safe to say there’s no shortage of happy backers present on the site!

One of the most important things for you to note about KS is that they review every single one of the campaigns that are put on their website. Because of this, they’re far more stringent about what can and what can’t be posted. A good place to start is by checking out the Kickstarter help page to see the types of campaigns they allow.

Another important thing to know about KS is that the campaigns that you do are “all or nothing.”

If you don’t reach the goal that you’re looking to reach, then you don’t get any of the funding that you tried to get in the first place. This isn’t the same on Indiegogo (we’ll get to that shortly!)

Where KS and IGG are similar is that if you are successful, you’ll have to wait up to 14 days before the money is actually transferred from KS and up to 15 days from IGG.

So Is It Go Go with Indiegogo?

Despite having a smaller audience and consequently fewer successful pledges to date (over $15.8million on KS vs $4.9million on IGG) (source) Indiegogo is still a very attractive alternative and is definitely a growing force in the crowdfunding scene.

One of the key differences between KS and IGG is that in contrast to the KS ‘all or nothing’ approach, IGG allows for a “Flexible Funding” system. This means that even if your campaign doesn’t raise all of the money you were hoping to, the amount raised can still be kept.

In addition to this, IGG also offer a “Fixed Funding” option, which works in exactly the same way as KS.

Which funding option you choose will depend on the fees you’re willing to pay.
Now, pricing can get a little complicated however these guides from CrowdCrux (here and here) as well as this Kickstarter Calculator by Ruben Pressmen are great places to start.

The biggest takeaway here is that Indiegogo takes a little more out of your funding if you go with Flexible Funding, and  when going down this route you’re responsible for giving out your donation perks. Fixed Funding involves paying less to IGG, and you don’t have to give out the donation perks if you don’t make your goals.

As mentioned above, Kickstarter is relatively strict about the campaigns on their website, but Indiegogo isn’t as restrictive.

According to an article in Forbes Magazine, “Indiegogo does not curate campaigns or place restrictions on project creators. Anyone with an idea, a financial need, and a valid bank account may create a campaign.”

It’s also interesting to note that whilst KS only allows campaigns to be posted from a limited number of countries (namely US, UK, Canada, Australia, New Zealand, the Netherlands, Denmark, Ireland, Norway, Sweden, Germany, France, Spain, Italy, Austria, Belgium, Switzerland, and Luxembourg), the same can’t be said for IGG which allows projects to be listed from over 200 countries!

So to wrap up, whilst Indiegogo is the smaller of the two sites, they may be better suited for certain projects, especially when location, flexible funding and Kickstarters stringent project regulations are taken into account.

However, with that in mind, the sheer volume traffic that visits Kickstarter and the fact that statistically speaking 43% of campaigns get funded vs between 9%-17% (depending on funding option) on Indiegogo speaks volumes. (source)

The best thing to do before committing to either platform is to explore both and make your decision based on which you feel most comfortable with. Neither is necessarily the “wrong” choice, but one may be better suited for your campaign than the other.

Related posts
30 Day Vs. 60 Day Campaigns: Which Is Better and Why?
September 20, 2015
What’s in a Headline? Why Your Title Can Make or Break Your Campaign
September 15, 2015
How to Create a High Impact Crowdfunding Video for Under $100
September 13, 2015
6 Things To Know Before Your First Crowdfunding Campaign
August 31, 2015
Recent Posts
Recent Comments
Categories