6 Things To Know Before Your First Crowdfunding Campaign 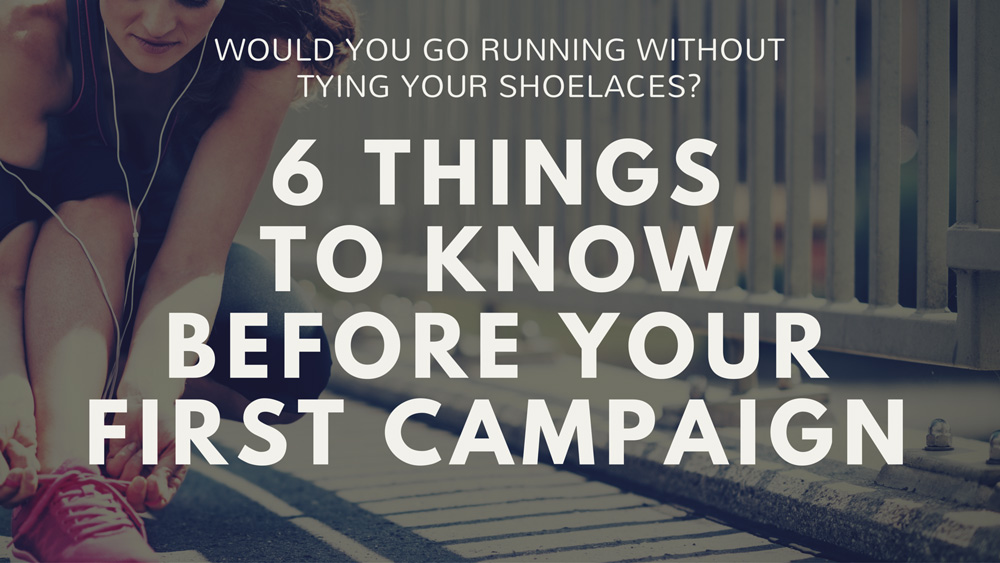 6 Things To Know Before Your First Crowdfunding Campaign

So, you’ve heard about crowdfunding; you’ve checked out the main platforms like Kickstarter and Indiegogo. You may have even backed a campaign or two. So, what now?

It’s time to jump right in and launch your first campaign, right? After all, according to The Crowdfunding Industry Report, crowdfunding in 2015 is set to double from last year to over $34billion. Surely it’s time to get yourself a piece of that pie? Isn’t it?

Not so fast… Before jumping in, here’s six things you should know (and plan for!) so you can stack the odds of success in your favour.

1.Crowdfunding is actually a form of marketing.

“So you thought crowdfunding was just a way for companies to raise funds? You’d be mistaken. Unlike getting a loan from a bank, crowdfunding earns you ambassadors as well as cash” says Ricardo Sequerra of the equity crowdfunding company, Seedrs.

Your backers may not realize it at the time, but they will eventually become your marketing department. That’s right – your marketing department. The importance of this should not be underestimated. It’s only natural that your early adopters will also become your biggest advocates, if you treat them right. That means you need to take provisions to ensure you give these fans a reason to sing your praises!

As this blog by Red Bull shows, failed crowdfunding campaigns can often come back to great success the second time around.

Getting people on board, early, is essential for a successful campaign. It gives your campaign credibility, as well as momentum, right out of the gate.

“When you present your crowdfunding campaign, it creates credibility and speaks to that, “Oh, Sally’s backing this, so it must be valid” mentality. It’s also known as social proof.” says Tania Dakka of LifeHack.org

When you create early interest, your campaign is strong before it has even begun. This is a key hurdle where many people fail. Rather than ‘build it and they will come’, think of it as ‘plan it, generate buzz, list it, then they’ll come!’

3. If you want to raise a lot of money, include a good video

The writers at ignitiondeck.com suggest “Video clips give visitors a better idea of your project – they can see you or your product in action rather than clicking through a series of static images. They are also labor-intensive, so don’t attempt to put together a clip if you don’t have the time, resources and expertise required. An amateur-looking video isn’t going to convince anyone to get involved, and at worst, could damage your campaign’s credibility.”

In other words, go big or go home. Make a video worth sharing that will get people excited about your venture.

Note: a good video doesn’t necessarily have to be expensive but it does need to be something people will resonate with and enjoy. Don’t forget that a personal touch also goes a very long way.

“Crowdfunding campaigns with personal videos raised 105% more than those without….You need a video and YOU need to be in it.” recommends Joseph Hogue, writer at Crowd101.com

4. Get to their wallet through their heart

“There’s a trifecta that you cannot ignore if you want people to tear open their wallets for you: Story, authenticity, and credibility. Bake these things into your campaign and you’ll pull people into it”, says Tania Dakka at Lifehack.org.

Well, your job is to show people you’re passionate and that you care. You need to make it absolutely crystal clear that your backers are contributing to a cause that’s greater than you. If you can demonstrate how important your campaign is, concludes Tania, “there’s a good chance they will reciprocate with genuine excitement and willingness to give and share.”

Don’t forget, your passion shouldn’t just be conveyed on your campaign page. If it’s authentic (and it should be!) it will resonate in every interaction you have with your audience, from your campaign page to your video to your social media, and everywhere else too!

You want backers. You want and need their money. Like a good marketer, you’ll need to be in front of your target audience, every day. You’ll also need to plan your strategy before you begin. Crowdfunding campaigns that have followed this method have enjoyed immense success as a result.

Creating and sharing content like blogs, infographic, landing pages, status updates, even guest blogging on other sites, can help your efforts in building your audience.

“The most successful entrepreneurs know the power of leveraging other people’s money to get to where they want to be. Well the best marketers know how to leverage other people’s audiences to do that too. You want to start this phase at least 3-4 months before you plan to launch your funding campaign.” recommends Chris Dyson of TripleSEO.com

6. Remember what your mother taught you!

If a stranger were to approach you in the street and give you money, what would you say?

Chances are, after checking to see if there’s a hidden camera and it’s not some kind of elaborate prank, you’d politely take the cash and say….”thank you”. Just because you’re online, doesn’t make the need for thanking your backers any less important. Find a way to show your backers, either individually or as a collective group, just how much their support means to you.

Why? Well, aside from the fact it’s just good manners, when it comes to crowdfunding, engagement leads to money. With each post, each engagement and each dollar, you are building relationships. Their investment in you will last longer than a one-time fee. You’ll secure, not only investors, but believers in your vision.

So there we have it – 6 tips to follow before you launch your first campaign. Although you might be itching to get started, take heed of these tips. Preparing and planning how you’ll achieve each will help to set the foundations for your success.

Let us know your thoughts in the comments below!

Related posts
30 Day Vs. 60 Day Campaigns: Which Is Better and Why?
September 20, 2015
What’s in a Headline? Why Your Title Can Make or Break Your Campaign
September 15, 2015
How to Create a High Impact Crowdfunding Video for Under $100
September 13, 2015
Kickstarter vs. Indiegogo – How To Pick the Right Platform for You
August 31, 2015
Recent Posts
Recent Comments
Categories