Beat the Mid-Project Lull: How to Keep All Eyes on You, Even When You’re Not the Shiny New Object Anymore – Crowdfunding Blueprint – Launch your campaign with confidence

Beat the Mid-Project Lull: How to Keep All Eyes on You, Even When You’re Not the Shiny New Object Anymore 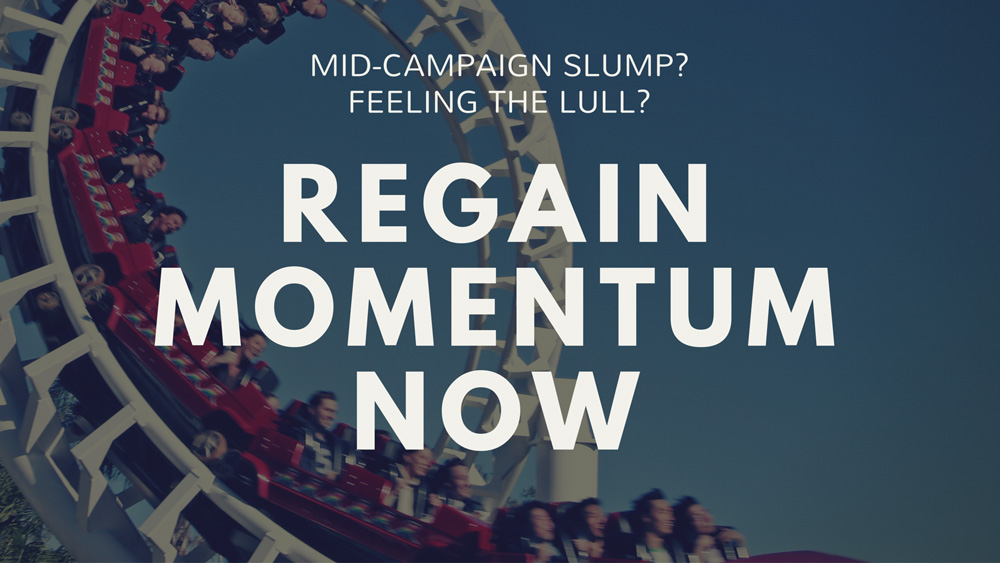 You’ve been doing your crowdfunding campaign for a bit now – 15 days if you’re on a 30 day schedule, 20 days for 40 days, and so on and so forth. You’re getting over that midway hump, and you’re starting to notice that the momentum and excitement surrounding your campaign is starting to dwindle.

You may be panicking.

Don’t panic! This is nothing new. No matter what it is, when something loses its novelty, we’re more likely to just sort of forget about it. Science even backs this up:

“When we see something new, we see it has a potential for rewarding us in some way. This potential that lies in new things motivates us to explore our environment for rewards. The brain learns that the stimulus, once familiar, has no reward associated with it and so it loses its potential. For this reason, only completely new objects activate the midbrain area and increase our levels of dopamine.” – Dr Emrah Düzel in a study about novelty and the brain.

Since it’s natural to lose interest in things that become mundane (i.e. no longer novel), how are you supposed to fight that off when your crowdfunding campaign is only halfway over? Here are just a few tips that can help you to keep everyone’s eyes on you throughout the “home stretch” of your campaign.

Start building momentum before you even officially start

Failed fundraising campaigns of any sort will have that same issue come up. The Classy Blog explains it this way:

“In all honesty, there are lots of reasons why fundraising campaigns peter out. But at the top of the list has to be a failure to properly unroll and launch the campaign. A lot of failed efforts follow the same pattern. A burst of activity around the launch of the campaign, some initial response, and then a slow fade.”

A lot of people won’t start pushing their campaign until they actually launch it. That means that you’re going to be behind the eight ball the entire time that you’re working on the campaign. If you start talking about it before the campaign even starts, you will get people excited and ready to put their money into the campaign before your website even goes live – and that will bode well for your goals throughout the entire campaign, and not just at the beginning of them.

Stretch rewards are not a new concept – there are all sorts of organizations that use stretch rewards and goals. Why? Mainly, because they’re a great way to get people motivated to push themselves further when the first goals have been achieved. In an article about why stretch goals work in the workplace, Steve Denning says:

“If we set aside the idea of stretch goals just because they are difficult to attain, then we start down a path to mediocrity.”

Mediocrity doesn’t work in the workplace, and it doesn’t work when you’re doing crowdfunding, either. You don’t want to strive for just the minimum amount – you want to see how far it can go and how far you can push it. So, by adding in stretch goals that people want, you will get people to keep pushing the momentum and sharing it with their friends. That, in turn, will get you more followers and more supporters.

Look at how Exploding Kittens worked out. While an extreme example, it’s still a good study of how stretch rewards can work. The original goal for the project was $10,000, and they raised over 8 and a half million for it. If you watched the campaign at all, you saw that the momentum kept going until the very last day.

Part of that was, of course, because everyone wanted to be part of a world-record breaking campaign. But they also had some fun goals, like making the expansion into a complete stand alone deck, and upgrading the box that it was coming in. These are what kept the momentum going even more.

Don’t make your targets too low

One problem you will see with crowdfunding is that people will set these really low numbers so that they can make sure that they get the revenue and capital that they were seeking from the campaign. While that can cause a major problem if you don’t make enough for your project’s costs, another big issue is that it can cause you to lose momentum during that troubled midway point. Why? Luke McIntosh explains:

“Given the choice between shooting too low or shooting too high, you should try to shoot high. The psychology of crowdfunding favours the artist. Say there are only 2 days until your campaign finishes and you’re still $1000 short of your target, you can double, triple, or quadruple your efforts to engage your fans for support. You can also engage your existing backers and see if any of them will ramp up their pledge amount. Your existing backers are already emotionally invested in your success and are more likely to want to see you reach your goal.”

So, if you make your goal too early, people who are excited about your project are going to be a lot less likely to share it after you make your goal.  If your goal is high, and you aren’t quite there yet, people are more likely to rally around the project and help push it the rest of the way. You want to see the project get out to the most people and get the most hype that it can, and shooting high will help you to be able to do that.

The update function is one of the most important functions that you have access to when you’re working on your campaign, and it can be a great tool to help you get through that midpoint lull. There have actually been studies done about this (like this academic study found here) that show that crowdfunding campaigns with substantial, high quality, and informational updates have a much higher success rate than those that do not. Michael Beier and Kerstin Wagner explains how this works in their paper:

“First, the frequency of interaction is one crucial aspect of communication intensity. High frequency content provision fosters social relationship building. The initial empirical results show that updates on crowdfunding projects can motivate a potential donor to give money to a project”

In layman’s terms, the more you post, the more emotionally involved people get. If you’re posting throughout the midpoint of your campaign and right up until the end, people are going to continue to share those updates via social media and other outlets. It lets them know that you care about this project and that you’re always doing new things. Post every other day, at the very least, unless you have information that is available daily.

So, as you can see, there are a lot of things that you can do in order to ensure that your campaign makes it through the midpoint lull and finishes strong. Keep these in mind when you put together a new campaign and are trying to get the momentum going. You will start to see huge differences in the results that you get!