How We Hacked Blab.im With A Whiteboard – Crowdfunding Blueprint – Launch your campaign with confidence

How We Hacked Blab.im With A Whiteboard

So yesterday we held our first ever Blab.im Blab 🙂

If you’re not familiar with Blab.im it’s a great new video chatting app that allows viewers and speakers to engage by syncing their Twitter accounts and accessing a live video stream.

Sound complex? It really isn’t.
Think of it as the evolution of webinar.
The speakers (in this case us, the CF Blueprint team) broadcast live to an audience who were tuned in via the app or website.

But as you’ve probably worked out from our title, things didn’t exactly go to plan.

As it was our first time using the site, we wanted to prepare thoroughly and make it clear this was a test  Blab.

Our plan was to talk about our experience building the Crowdfunding Blueprint course, and discuss how we went from having no idea to interviewing $56,000,000 worth of experts within six months.

So there we were, all set to go.

We’d done our homework, we had a ‘show plan’ in place, we knew what we were going to talk about, and we set the title of the Blab to clearly indicate it was a test broadcast. All that was left was for us to start. 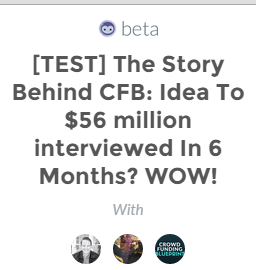 Now, under normal circumstances, on a test run, you’d take a rain check and postpone to another day, right?

Well, the thing was, this Blab was going way beyond our wildest expectations…
In fact, it was filling up FAST!
People from all over the world were joining the room, eager to see what was going on.

What’s more, the comments and engagement we were getting really took us by surprise – never in our wildest dreams did we expect so many positive comments and people wanting to hear our story.

Viewers were loving what we had to say (there’s a “props” button they were hitting to show us!).
So, despite the microphone mishap, we decided to carry on.

What happens when your best laid plans go wrong?
You improvise, adapt, and put on a showstopping performance, of course!

Much like a crowdfunding campaign that hits a stumbling block, it doesn’t mean it’s the end – not unless you give up.
And Jurgen’s definitely not one to give up.

So how did he continue?
Well, after trying to communicate by sign language (not a good look!), Jurgen had a brainwave.

You could literally see him having his Eureka moment. 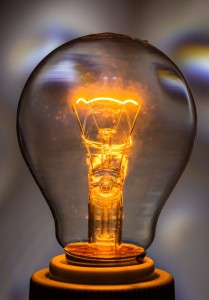 He disappeared off screen for a few seconds, then hurried back with a whiteboard!

The viewers loved it.
Every time he had a point to make, Jurgen would write it out in a concise, succinct manner – a series of one liners.

His pearls of wisdom were the perfect complement to the conversation Michael and I were having.

At the end tally, Jurgen had more ‘props’ than Michael or I.

Next time I think all of us need to grab a whiteboard and communicate without sound!

But on a serious note, Blab blew us away.
The community were fantastic, the software and site was intuitive and user friendly, and there’s no doubt it’s going to play a huge role in our content strategy from now on.

For now, I’ll leave you with a brief glimpse of Jurgen in action